It's been snowing all day, except for a brief pause about midday when i took the garden shots. Stopped just now when i went to get my brolly off the porch.
Shots are of our back garden and Parker's Piece on my way home.  The cold killed my scooter battery, even though it was almost fully charged when i went out.  About half way down Mill Road, the power simply died and we crawled the rest of the way - and i literally had to push it into the Mews!  i've noticed this before, how the cold drains it, i mean.  It's very odd and not being a scientific person, i have no idea why it does this.  It also takes longer to charge it up. 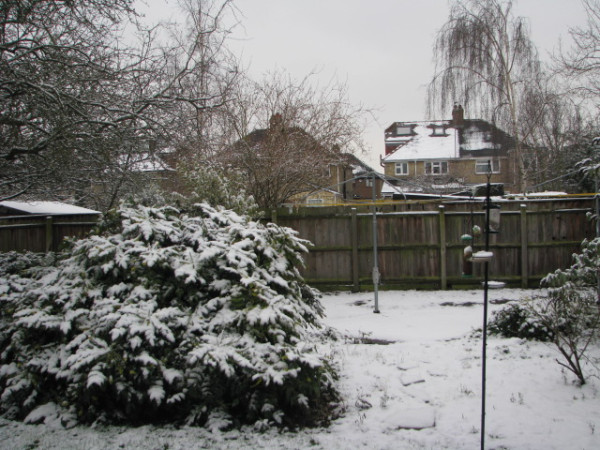 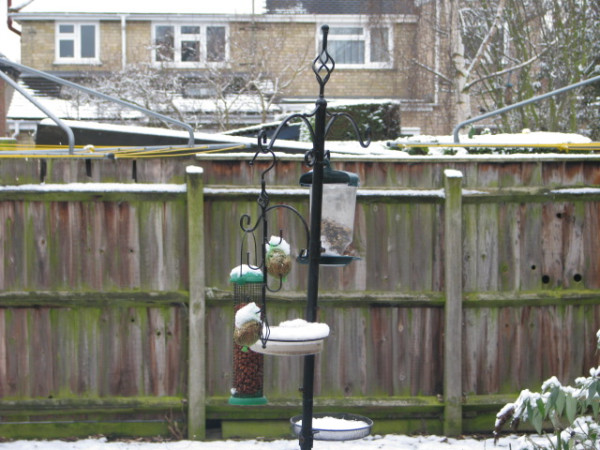 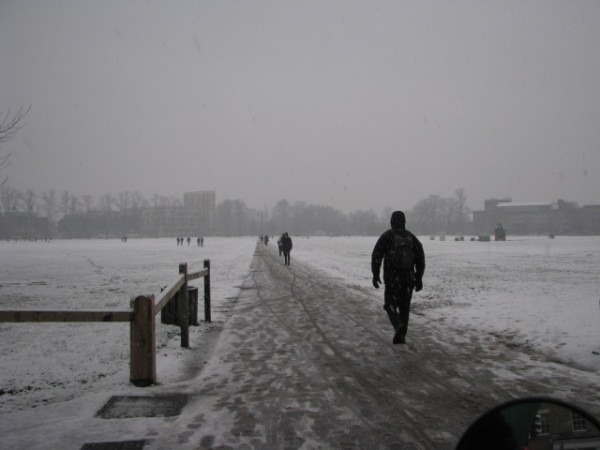 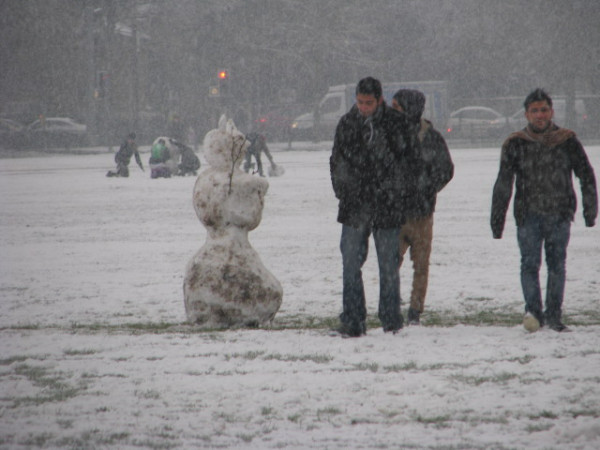 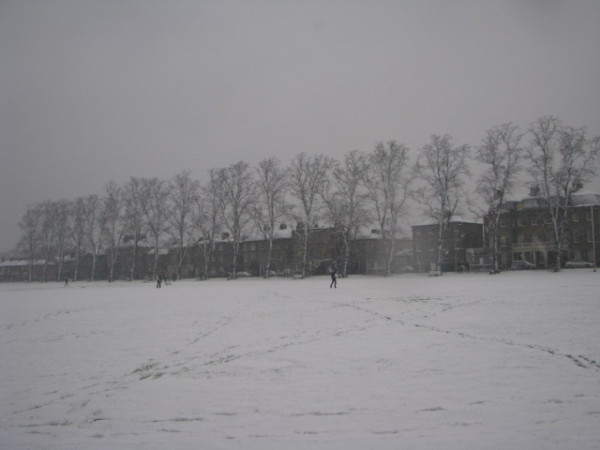 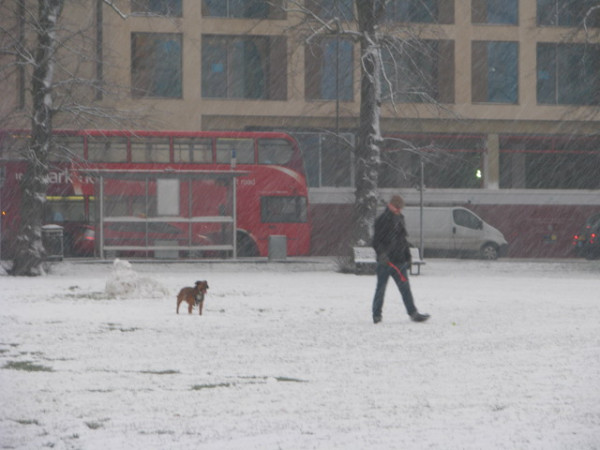 It looks like it's raining, but it's snowing hard! Great big flakes... When the man threw a ball for the dog, it skidded passed it and had to cast about in the snow to find it, but it did eventually.  It's still cold and i actually have the heating on :D
Stay warm and healthy, people!

i tend to tape those series with adds in them as i truly detest them and then i can fast forward through them [love my Sky Plus].  But when i finally caught up on Damian Lewis' 'Life' series, i actually bought it after seeing just one episode on TV and luckily just loved it.  He was just quirky enough without being annoying and he had some stalwart back up.  i did find his live-in financial man unbelievably naive at times but it all came out in the wash, i guess.  Towards the end of the second series, i was desperately afraid Charlie was going to die as i couldn't see how he was going to get out of it all, without doing some killing of his own.  Have you seen it?  i might tackle 'Homeland' now - i came in on the middle of that as it clashed with something i was watching.

i've also managed to find some old TV series on DVD now - 'Marshall of Madrid', a couple of episodes of Glenn Ford's 'Cade's County' and a UK series from yonks ago [1977!!] called 'Who pays the Ferryman?' which was set and filmed mostly in Crete. The music was very popular Greek stuff.  And even older a series i never knew existed 'Whispering Smith' - starring [are you ready for this?] Audie Murphy.  There had been a film and then this little series.  i haven't watched it yet but i'm fascinated to see it.  Coming into the more recent present, i had a Don Johnson spasm and bought the first two Series of 'Miami Vice', the first 'Nash Bridges' and what turned out to be a bootleg copy of 'The Long Hot Summer' that he did for TV, with Jason Robards and Judith Ivey.  Good stuff, even in bad focus!  i hate these little crooks who do this - i paid good money for it too!
i had a Daniel Craig moment not long ago and between Amazon/Ebay picked up some of his stuff very cheaply - 'The Invasion' [a revamp of the BodySnatchers] with Nicole Kidman, 'Dream House' with Naomi Watts & Rachel Weisz [when they met], Cate Blanchet's 'Elizabeth' and the old TV series from '96 'Our Friends in the North' [which i missed the first time round], with Daniel, Mark Strong & Chris Eccleston [the 9th Doctor].  i'd seen Chris in Robbie Coltrane's 'Cracker' series, which i love.  i love Robbie as much as Billy Connolly, although Billy is funnier than he is, Robbie is a much better actor.

When i've chewed through that little lot, i'll move onto the single films.  It's great to be able to pick up really cheap films that i love, sometimes for a couple of ££.  And the odd one, i missed because they never came out near me or never left USA.  'True Women' must be one of the latter [Dana Delany, Annabeth Gish & Angelina Jolie], 'Appaloosa' [Ed Harris & Vigo Mortensen], '9' [with a whole slew of women and Judi Dench], 'Silver Bullet' [one of the good werewolf stories], 'Tombstone' [Kurt Russell's much better version], 'LadyHawke' [i adore Rutger Hauer] - four amazing Glenn Ford classics 'Blackboard Jungle', 'The Big Heat', 'Cowboy' and '3.10 to Yuma' - far superior to the Russell Crowe remake.

i must buy a copy of Kyra Sedgwick's 'The Closer' Series 7 when it gets cheaper, i enjoyed the series so much.  i have 1-6 already.  It truly is amazing what you can pick up for a song in the sales and clearances, i'm delighted to say.  You'd think all of the above cost me heaps, wouldn't you?  But by choosing bits from Amazon/Ebay, as they became cheaper, it really didn't.

i'm delighted 'Rizzoli & Ilses' has started again - nothing to do with the books, of course, any more than 'Bones' is.  They're just using the names is all.  i'm recording the series of David Attenborough's 'Africa' and 'Galapagos' [i never miss him] and David Tennant's latest 'Spies of Warsaw'.  We've just had the first of two parts and even though David was excellent, it's an odd duck of a thing.  Old spies in Warsaw between the Wars would seem a strange topic and it is.  It's very 'talky' with bits of action to make sure we're still awake, i think!  Very dated in many ways but you can't have agents from those times using modern language, it just wouldn't work.  There's enough of David for the fans but the copy i'm buying isn't for me but a serious US fan.

Right, i'm off to make a fish pie...  Toodles!
Collapse